Kanazawa Castle is in excellent example of a Japanese Castle. It is in Kanazawa a couple hours journey from Osaka on the train. It is located right next to the lovely ornamental Kenrokuen Gardens. (Which apparently was once part of the Castle Outer Gardens.) The design of Kanazawa Castle emphasizes horizontal lines, while that of European churches and castles, like most Gothic style buildings, emphasize vertical lines.

It was built by Lord Maeda in the 1580’s but has also burned down several times throughout history and been damaged by earthquakes. It has been faithfully restored using traditional Japanese construction methods including use of tongue and groove joints throughout the building instead of nails.

That Castle has a series of gates, large thick earthen walls, watch towers and moats. The roof tiles are made of lead and the walls covered with white plaster.

It is open all year round and admission is free.

One could spend a couple of hours wandering around this Japanese Castle complex. 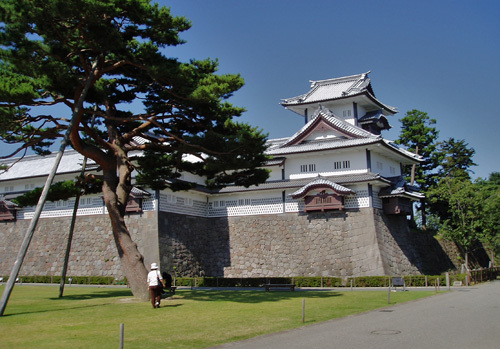