Posted on April 9, 2012 by Sekolah Victory Plus

Sometimes the accidental plans make for the best experiences. In 2008 we flew to Padang, a rather nondescript (& boring) medium sized city in South Sumatra, it was the one crushed by an earthquake about two years ago, it had some nice roadside seafood restaurants along  rocky and not particularly clean beach. Not a lot of English was spoken there, but I think they sometimes get two or three native speakers for teaching.

Outside of Padang we visited a famous beach, Pantai Air Manis, it was horrendous, partly because it was a public holiday and pretty much the entire population of West Sumatra had decided to visit. We had caught a taxi there, his AC was broken, he drove slightly more crazy than the average Indonesian taxi driver and he had to drive up an embankment to avoid us being hit by a train. We had bargained him down to about $20. The trip itself took almost two hours due to the traffic for a beach that was only 10 kms or so down the coast. Not a good start for a relaxing tourist day. 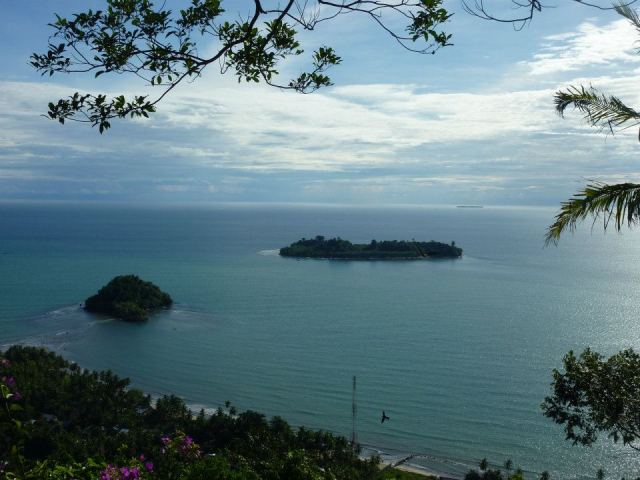 The beach was crowded,many cars had just parked on the beach itself and there was dozens of stalls illegally selling coral and crabs on the beach, which just depressed me. We wandered around, including walking over to the small island called Pulau Pisang Ketek or Banana Island, visible in the picture, dodging motorbikes and rubbish as we did so. A bowl of instant noodles later and we faced the prospect of catching ‘our taxi’ back and the ‘macet’ or traffic home.

At one end of the beach there was some sort of popular ‘sight’, it looked like a fossilized boat, with some barrels and ropes carved in the rock. It turns out it has a legend connected to it.

This is about Air Manis beach located on Padangbaycity and Malin Kundang “curse stone”.Malin Kundang is a famous Minangkabau and Malay folklore and the legendary story is said to be originated here in Padang where the remains of “Batu Malin Kundang” is located.

This folkfore is about a man named Malin Kundang who hails from a poor family. Just like any other Minang men, Malin Kundang decided to travel elsewhere to seek good fortune, leaving behind his old mother. His life changed when he married the daughter of a rich man in Siam. Soon after achieving success and gaining great fortune he sailed back homeward on his own ship to Padang together with his wife and crews.

Upon hearing of Malin Kundang’s return, his mother rushed to the beach to meet her long lost son. Unfortunately, Malin Kundang felt ashamed upon looking at his old and poor mother – he was a rich man with fine clothing and a beautiful wife while his mother was looking ragged and poor as she was. In his undisguised disgust he ignored his mother, refused to greet her and returned to his ship.

Humiliated and heartbroken by her arrogant son’s behavior, his mother fell to her knees in desperation and prayed to God asking that her son be punished for what he did. Soon a terrible storm rose up and Malin Kundang’s ship was wrecked upon the rocks. Realising his mistake and sin for ignoring his mother, the badly injured Malin Kundang tried to get ashore to seek forgiveness from his mother but as he crawled on his hands and knees he was suddenly turned into stone.

Until today, a stone that from a certain angle resembles the figure of a man on his hands and knees with his head seemingly buried in the rock can still be found here in Pantai Air Manis. It is said that Malin Kundang has been forced to stay on the beach forever, begging for forgiveness from his mother. Around this rocky figure barrels and ropes have been carved into the stone to represent the shipwreck washed up on the shore.

The tale of an ungratefull son makes the tranquil Pantai Air Manis a legendary location to visit that may offer some lesson in life.

I noticed some traditional boats giving 15 or 20 minute joy rides to tourists, I had a cunning plan. I bargained one of the boats to act as a taxi and take us back to Padang via the ocean. A novel idea for him, but in the end he decided that 200,000 IDR or $20 was fair, which was probably way over priced, but I did not care at that stage. I quickly gave our waiting taxi driver some money so he wouldn’t feel so bad and off we went on the boat. I love boats and it was glorious. 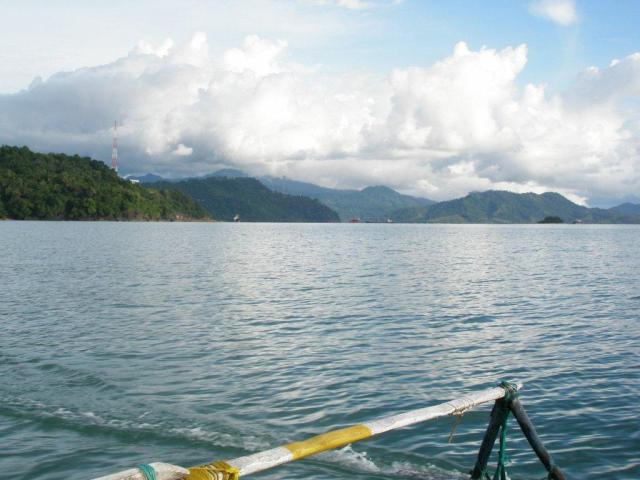 I liked it so much I asked him to come back again the next day and take us to a different nearby island. We packed a lunch and some drinks and he left us exploring and sunbathing on an unnamed island off the coast of Padang. It was quiet, it was clean, it was peaceful!

It turns out it was not a completely deserted island, one other boat arrived during the day, but they stayed an hour only, and a young boy turned up, climbed a coconut tree and gave us some fresh coconut to drink, (and then he charged us 10,000 rups, – which is perfectly reasonable). This trip stands out in my mind as one of the better ones even thought it started out as a disaster. All it took was some creativity and negotiation.

As far as visiting Pantai Air Manis (Sweet water beach) goes, I would rate it as two stars, but after ‘discovering’ that we could hire a boat and travel to Padang beach and then to a tropical deserted island (well, almost) for the day, our rating has upgraded to 4 stars! 🙂

2 Responses to Pantai Air Manis: off the beaten track